By Shoshana Kohn-KutnyJune 2, 2022No Comments 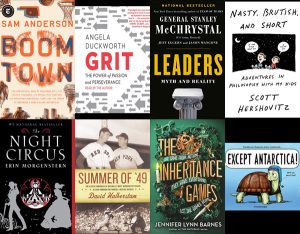 To get us ready for summer break, Middle States staff shared their top reading recommendations.

Boom Town: The Fantastical Saga of Oklahoma City, Its Chaotic Founding… Its Purloined Basketball Team, and the Dream of Becoming a World-class Metropolis by Sam Anderson

“An idiosyncratic mix of American history, sports reporting, urban studies, gonzo memoir, and much more to tell the strange but compelling story of an American city whose unique mix of geography and history makes it a fascinating microcosm of the democratic experiment.” – Henry McCorkle, Director of Global Membership

Grit: The Power of Passion and Perseverance by Angela Duckworth

“The secret to outstanding achievement is not talent, but a special blend of passion and persistence she calls ‘grit.’” – Mary Burke, Ed.D., Associate Vice President

“Thirteen profiles of history’s great leaders, including Walt Disney, Coco Chanel, and Robert E. Lee, show that leadership is not what you think it is—and never was.” – Glen Mort, Ed.D., Interim President

Nasty, Brutish, and Short: Adventures in Philosophy with My Kids by Scott Hershovitz

“Following an agenda set by his young sons Rex and Hank, Hershovitz takes us on a fun romp through classic and contemporary philosophy showing us that all of us have a lot to learn from listening to kids—and thinking with them.” – Pricilla Feir, Ph.D., Associate Vice President

The Night Circus by Erin Morgenstern

“The Le Cirque des Rêves arrives without warning in fields around the world, opening its gates between the hours of dusk and dawn. Beyond the smoke and mirrors, however, a fierce competition is underway – a contest between two young magicians, Celia and Marco, who have been trained since childhood to compete in ‘a game,’ in which each must use their powers of illusion to best the other.” -Shoshana Kohn-Kutny, Communications Manager

Summer of ’49 by David Halberstam

“This classic baseball history documents a pivotal moment in the rivalry between the Yankees and the Red Sox, pitting brother against brother, introducing rookies who would grow up to join the Hall of Fame, and capturing the drama of a nail-biting championship season.”  – Jeremy Basescu, Manager of Volunteer Services

Except Antarctica! by Todd Sturgell (Ages 4-8)

“When the narrator explains that turtles are found on every continent except Antarctica, one determined turtle sets out to prove him wrong. After recruiting other non-Antarctic animals along the way—much to the narrator’s dismay—Turtle and his friends travel through fields and forests, and cross an entire ocean to reach their goal.” – Audra Chin, Director of Policy and Operations

Happy reading and best wishes for a wonderful summer.

Thank you for your commitment to continuous growth and improvement.

We look forward to working with you in the fall!