From Zero Sum to Positive Sum

By Audra ChinOctober 11, 2022No Comments 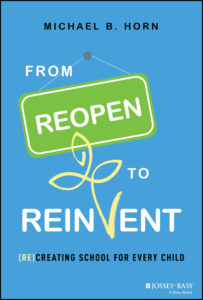 As I read Michael Horn’s take on mastery-based learning in his new book, From Reopen to Reinvent, I couldn’t help but recall one of the biggest risks I took as an educator.

During my time as Head of School at Malvern Prep (a Middle States school), we initiated a schoolwide transformation from a teacher-centered to a student-centered approach. From the beginning our Middle School Head (now Malvern’s Head of School) rallied his division, but the upper school needed a spark.

So I decided to teach a Social Entrepreneurship class that would be 100% team-based and 100% project-based.

I had never taught anything even remotely like it, and if I failed it would be highly public. But I also knew that I couldn’t ask teachers to shift their teaching practice if I weren’t willing to leap first.

To build capacity in other faculty and to create (I hoped!) evangelists, I recruited four teachers to help me. One question dominated our first design discussion: How were we going to grade students if the class was 100% team-based and 100% project-based?

“What if we assess them on the basis of public demonstrations of learning?” I asked my colleagues. [1]

This proposal prompted immediate discomfort. One person asked, “But how will we know if they really deserve an A?” [2] Later, when students signed up for the class, we revisited that conversation. I heard things like, “Jimmy is a straight-A student.  He’ll be great in this class.” Or, “Bobby doesn’t always put in full effort. What if his teammates complain?” [3]

Although at the time I didn’t understand “mastery-based learning,” that was, in fact, what I had proposed. And as I would quickly discover, some teachers—and students, and parents—struggled to accept a different paradigm.

When we see classes as always consisting of some “smart” kids and even more “not-so-smart” kids, we are expressing a zero-sum worldview. (The same goes for “hard working” kids vs. “lazy” kids.)

That zero-sum mental model strikes me as one of the most important concepts in Michael Horn’s From Reopen to Reinvent. It drives grades, which drive assessments, which drive curriculum, which drives instruction—all of which add up to messages that students internalize: “I’m an A student,” or “I’m not good at Math,” for example.

As Horn says early in the book,

“Summative and standardized tests aren’t used to help students and teachers to figure out how to make progress. They’re used to help sort students into different pathways.

“Tests aren’t inherently bad. They are critical to learning. But when they are used as an autopsy on a student, as opposed to an actionable moment, they become counterproductive. […]

“This zero-sum mentality—that for every winner there must be a loser—means that by age 18, before people have lived most of their lives, we have labeled the vast majority of students and signaled to them that they aren’t good enough for certain pathways or that they are ‘below’ others.”

The antidote, according to Horn, is mastery-based learning. “Measuring students against a standard instead of each other can lift students and teachers out of this spiral into a positive-sum system,” Horn argues.

The shift from a zero-sum to a positive-sum mental model can have subtler effects. Consider physical education (PE). Many argue that it takes away time from “real” classes, or that it wastes time because it doesn’t develop athletes. But in From Reopen to Reinvent, Horn tells the story of a PE teacher Peter Driscoll, who shifted to a CrossFit model:

“His high school students now set personal fitness goals with clear numbers attached to them. This is to ensure that each student is competing only against themselves, not anyone else in the class or the school.

“Students plan how they will tackle the workout of the day. What’s their strategy and how will they pace themselves? Where do they need to scale a given movement, for example, so that they can safely and successfully complete the workout?

“Finally, after the workout, they receive immediate feedback on how they did. They use the information to reflect with Driscoll on what they can do better to realize their personal goals.”

Defining goals, selecting strategies, using feedback to improve—aren’t those skills at the heart of achieving our human potential?

To be clear, shifting from a zero-sum to a positive-sum model of school won’t be easy. As one of my former colleagues likes to say, “Teachers cannot create an experience for students that those teachers themselves have not had.” So if we want to initiate a shift in our schools from a zero-sum to a positive-sum worldview, we should begin by inviting teachers into new professional learning and growth experiences. [4]

The stakes are high. The rewards are even higher.

Please register for our live interview and Q&A with Michael B. Horn on Oct. 24, 12 pm ET. To register, click here.

[1] Teams would pitch their projects to a CEO panel in a public setting that included an audience of parents, teachers, students, friends, and sometimes strangers who were curious. We borrowed this model from High Tech High in San Diego, a network of project-based learning schools.

[3] When we say that a student “is” a certain way, we tend to place them in invisible prisons.

[4] A member school hired Middle States to design and implement a new teacher growth and development program. We are taking a mastery- and strengths-based approach to the work. Stay tuned for stories from that work.