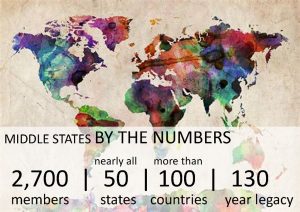 Historically, MSA-CESS has operated in the mid-Atlantic region (Delaware, Maryland, New Jersey, New York, Pennsylvania, and the District of Columbia); with its cooperative partners, it has expanded its scope to include schools and institutions seeking accreditation throughout the United States. The Commissions also award accreditation to member institutions in more than 100 countries around the world.

In accordance with the Final Rule to Revise Accreditation and State Authorization Regulations, the Middle States Association Commission on Secondary Schools (MSA-CSS) has providing written notice to the U.S. Secretary of Education effective July 1, 2020, MSA-CSS has received approval from its Commission to expand as follows: “The Middle States Association Commission on Secondary Schools is an accrediting agency for certain secondary and post-secondary non-degree granting schools located inside or outside the United States, including but not limited to its states, commonwealths, and territories” The Commission on Secondary Schools is now recognized by the U.S. Department of Education as a gatekeeper for eligibility for Title IV funding for postsecondary, non-degree granting institutions and distance education throughout the United States.

The Commissions on Elementary and Secondary Schools are affiliated with the United States State Department’s Office of Overseas Schools and provide accreditation services to American and international style schools attended by members of the U.S. foreign service and U. S. citizens working for non-government agencies and multi-national corporations.

The Commissions on Elementary and Secondary Schools are founding members of the International Alliance of Accrediting Associations which includes the major regional, national and international accrediting agencies.